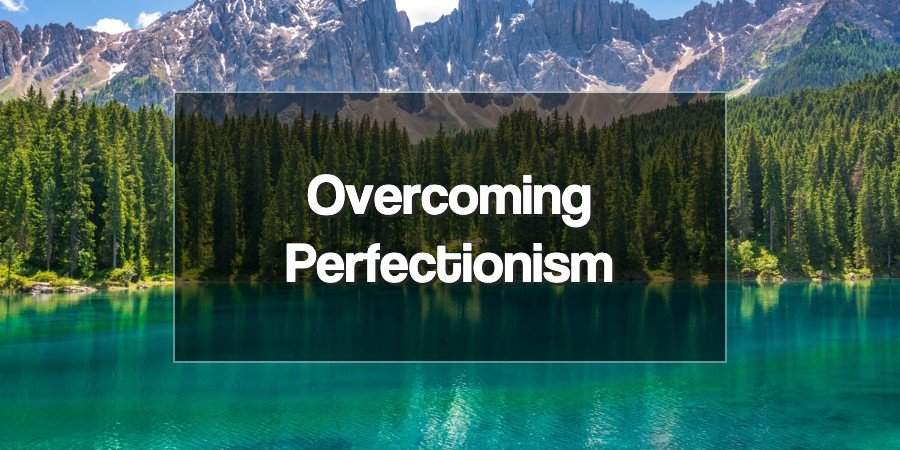 “I’ve made a mistake.” Do you have a hard time saying those words? I certainly did. In fact, I’ve spent most of my life doing everything possible to avoid anyone ever seeing me make a mistake.

While the approach has earned me a strong personal and professional reputation, I’ve come to realize it’s also held me back in important ways. The relentless pursuit of mistake-free living has a significant cost. Now, I’m working on owning failure and overcoming perfectionism.

How I Developed Perfectionist Tendencies

The straight dictionary definition of perfectionism, courtesy of Merriam-Webster is:

a disposition to regard anything short of perfection as unacceptable

I’ve spoken with other perfectionists and realized that each developed their perfectionist tendencies in different ways. Some were intentionally built by overbearing parents trying to create perfect children. For others it’s part of experiencing OCD. (To be clear, I intentionally refer to tendencies and don’t claim any sort of mental health diagnosis here.) Still others couldn’t quite source it.

For me, it was a combination of mostly positive experiences stacking up in a perfectionist combination.

I developed my perfectionist streak young. As the oldest child in a family headed by a single-mother I took on responsibility early. I was an exceptional student, identified as gifted, and rewarded early and often for working ahead. It became the expectation that I would do it better than anyone else.

I always had a tight circle of friends and we drove each other through competitiveness. In our group, mistakes were quickly leapt upon with taunting and ridicule. It wasn’t mean-spirited, but it was ever present.

An avid reader, I immersed myself in epic fantasies in which the heroes were ultimately responsible for the world. Failure literally resulted in death, destruction, and sometimes even the end of existence.

These things combined meant that my self-identity was positive, but always achievement oriented. External praise was important, it would be a lie to say otherwise. Yet, I’m also highly intrinsically motivated to achieve goals and outperform the norm.

This has served me well in life and professionally. If I take something on, I do so with the highest of expectations and will produce the highest quality.

I will work at a new skill until I’m great at it. I find it impossible to do anything at a mediocre level and embrace “good is the enemy of great” from Jim Collin’s classic book (affiliate link).

I recognize the benefits of this approach and credit many of the positives in my life to my perfectionist streak. Even as I write this, I can’t pretend I’m going to fully relax from my pursuit of excellence.

Yet, as I get older I’ve also become more aware of the costs.

What’s wrong with wanting everything to be perfect?

Why I’m Overcoming Perfectionism -The Downsides

While I’ve achieved a lot due to my perfectionism, I now believe I could have achieved more with a different approach. At the very least, I would have enjoyed parts of my life more. Here are some of the many pitfalls of perfectionism.

Perfectionists tend to be procrastinators. Why? A fear of producing something that is less-than-perfect means you wait until the very last minute to finish it.

You might be delaying to ensure you’ve done everything possible with it before you let it out to the world. It may be that it’s hard to start unless you see the clear perfect ending. Or, by not getting to it until the last minute you might be providing yourself with a mental out for why it’s less than perfect.

It took me far too long to realize this lifelong struggle was related to my perfectionist tendencies.

As a result I’ve lost far too much sleep, missed too many important activities, and spent too much mental energy by waiting until the last minute.

A Need to Be Right

Everyone has a need to be right. Research has shown that most people will twist themselves into mental knots to defend their position even against overwhelming evidence.

This is even more true for a perfectionist. If your entire identity is built upon perfection, a simple mistake can cause grievous damage. So, a perfectionist will publicly defend an incorrect position even while mentally berating themselves.

The cost here is obvious. On an individual level, refusing to admit you’re wrong damages relationships and erodes interpersonal trust.

Refusing to admit a mistake is a total leadership failure.

A functional society needs people willing to reconsider their positions. Our politics are poison, our world is crumbling with science denial, and people waste their time dunking on each other on social media.

American politics in general is now built on the foundation of staying committed to a position, even when clearly wrong. “Flip flopping” is somehow worse than being ethically bankrupt.

We’d all be better off if everyone, especially those in leadership were willing and able to say “I’ve made a mistake.”

We pretend that perfectionism is the pursuit of excellence. Instead, it’s primarily motivated by a fear of failure. A perfectionist can’t be less than amazing, can’t be wrong, and certainly can’t fail.

Perfectionism will prevent you from taking on goals that you aren’t sure you can achieve. It’s better not to do something, than to do it and fail.

This has impacts professionally, financially, and creatively. Combined with my childhood financial insecurity the tendency to seek out a sure-thing (or at least aggressively minimize the cost of failure) means I’ve missed out on incredible opportunities.

Some achievements require taking great risks. Perfectionism can prevent that.

Real learning requires failure. The most productive learning is in the zone of proximal development, where you will fail without support.

While perfectionism means I’ll grind it out until I can do it, this private learning is slower, and often less-effective. I’ve missed out on learning from the previous iterations and experiences of others.

Perhaps the greatest cost of perfectionism is the inability to enjoy success. Remember, it’s about avoiding failure, not celebrating achievement.

A perfectionist expects things to be great. So, having a project or achievement recognized is simply a reinforcement of the lowest expectation. Not having it recognized, or being considered simply good, is crushing.

Also, even the greatest success is temporary. A perfectionist is immediately looking for the next problem to solve, or the next challenge to exceed.

Perfectionism may lead to success, but it rarely leads to satisfaction.

I’m in my 40s. My identity is well-established. I won’t pretend I can totally change my bias for action, goal-orientation, or perfectionism. But, I can recognize the downsides and try to be better.

As a result, I’m working to change my personal responses and actively resist perfectionist messages in my leadership role.

I try to admit when I’m wrong. It’s not easy since so much of my identity is tied up in being right.

My two most common responses when confronted with a mistake are to try to justify, or to double-down and insist it wasn’t a mistake. Those are not helpful.

If I recognize that defensiveness, I take a deep breath and then say “You’re right. It was a mistake.”

I’m not always able to do this, but when I can the results are remarkable. Those who know me are often stunned into silence (ha, a win!) and/or the conversation immediately becomes more productive.

I’m not just waiting to be called out on a mistake. I’m also trying to explore and expose my moments of failure.

When I turned 45, I published my biggest financial mistakes. That may not seem like much, but as someone who spent most of life hiding even the smallest slips it wasn’t easy.

In my professional life, instead of only sharing anecdotes of success, I’ve intentionally started sharing failures and what I’ve learned from them. Again, it’s been surprisingly powerful and opened up new conversations.

The relentless marketing of perfection and social media images of success aren’t helpful for actual development. It turns out people actually make mistakes and learn from them!

Perhaps my biggest change has been a shift from only rewarding perfect final outcomes to recognizing progress. Admittedly, I still rarely give myself this grace.

However, in professional supervision, whenever someone comes to me and has missed the target I immediately focus on the progress they’ve made. Then, the discussion is about what the next steps are. This is far more productive than feeling failure and trying to avoid the shame spiral.

As a result, people who work with me are happier and feel more supported. We aren’t backing off our pursuit of excellence, we are just going about it in a healthier way.

This one remains hard for me at a personal level. I simply feel more motivation from the pursuit of a goal than it’s achievement. The truth is celebration isn’t important or motivating to me. I’ve accepted that personally, but it’s been hard on those I supervise.

Now, as part of overcoming perfectionism at work I build in intentional moments to recognize the success of individuals or our school. I’ve built intentional time in meetings, engaged others, and created systems that require me to take a moment before moving onto the next problem.

How This Shows Up in My Finances

I explore all kinds of topics on this site, but ultimately it is about pursuing financial independence. Overcoming perfectionism is important there, too. All of the downsides I’ve listed above show up in my money mindset.

It would be easy to limit risk, refuse to admit mistakes, and agonize over losses. Worse, I could achieve financial independence and experience no joy from it.

We regularly set, and review financial goals. Tracking those goals and hitting our milestones is important. Yet, the pursuit of FI also requires accepting outcomes outside of my control. Risking money in the market is hard, and sometimes the market goes down. (Like so far in 2020!) Fear of failure could prevent me from putting money into the market when I should.

Our plans emphasize the journey. We are creating good financial habits and taking actions that improve our financial position. That will give us flexibility and choice. We aren’t pushing for early retirement, but instead embrace FIOR (financial independence optional retirement.)

Similarly, our calculations include an assumption of underperformance. I don’t assume we’ll squeeze out every dollar, achieve industry-leading returns, or actually hit our budget targets. Instead, we assume none of those things. That would have been impossible for me to do even a few years ago.

Automation is perhaps the most important characteristic of our financial journey. It mitigates almost all of our mindset challenges – including perfectionism. The investments happen monthly and are based on our goals and written investment statement. As a result, I can’t judge them as good or bad, perfect or imperfect results. They simply are. That’s important.

Finally, our monthly goal-reviews include a discussion of balance between our financial pursuit, our professional responsibilities, and personal happiness. I can’t pursue perfection in such a messy construct!

You Don’t Need to Be Perfect

I’ve made a mistake by pursuing perfection in all things. I’ll always be goal-oriented and motivated by achievement. This is true in my personal pursuits, my professional life, and on the path to financial independence.

Yet, it doesn’t have to define my life. By overcoming perfectionism, I’ll learn more, take more risks, and ultimately have better outcomes.

Our society emphasizes perfectionism to our detriment. Do you struggle with perfectionist tendencies or have you avoided them?

What steps can you take to lead a happier and more successful life?