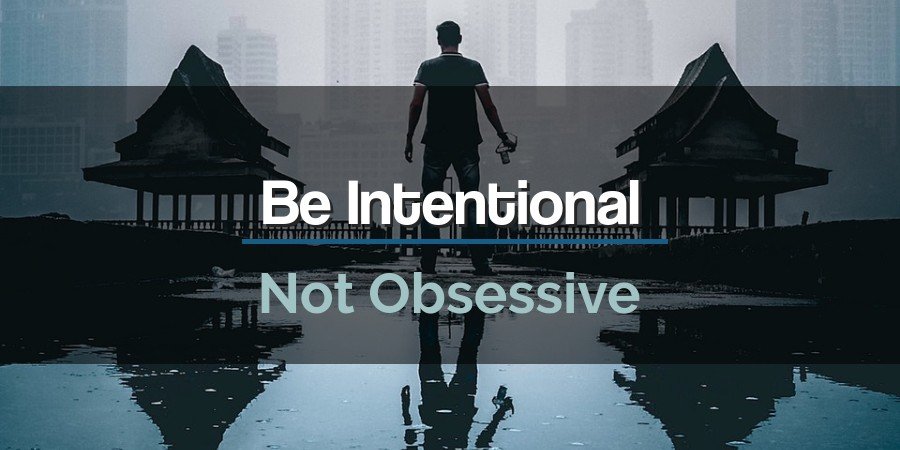 All things in balance. I’ve always appreciated, and rarely embodied, this phrase. I’ve certainly failed consistently throughout my financial journey. Now, after a period of frenzied change, I’m trying to be intentional not obsessive with my finances. You should too.

My family has a history of addiction. I’ve seen family members struggle with alcoholism, cigarettes, and a variety of other substance abuse issues. As a result, I’ve always been very careful to avoid starting any substance worse than caffeine. (Full caffeine addiction in effect though…)

Instead, my addictive tendencies show in an obsessive pursuit of goals. You may think this is a good thing, but combined with a strong bias for action, I’ve found it to be problematic.

Sometimes our society romanticizes the concept of obsession. The obsessive genius who throws his life away chasing a dream until he finally achieves it. The obsessive guy who won’t take no for an answer (yuck). An obsessive pursuit of the pinnacle of athletic achievement.

The truth is, those scenarios will end badly. In reality, obsession is rarely positive. In fact, the very definition of obsession is:

“A persistent or disturbing preoccupation with an often unreasonable idea or feeling.”

I can honestly say I became obsessed with financial independence after discovering the idea three years ago. Many do. The sudden view of future freedom is captivating, motivating, and hard to ignore.

Unfortunately, as in all things, obsession with your finances isn’t going to work out well in the long run.

The focus and drive that comes with obsession can feel so great. Initially.

It’s common for people to be obsessive about financial independence in the beginning. In the first months, or year, they make massive life changes, crank up the savings rate, and check their net worth constantly.

Unfortunately, FI is a long game. Even in the best case, it takes several years to move from clueless to financial independence. The power of time and compounding can’t be accelerated.

Obsession doesn’t do well with monotony. Once the initial excitement starts to fade, you may lose motivation entirely. Or, perhaps your obsession finds a new, less financially stable target.

Obsession Squeezes Out Other Things

The very nature of obsession makes it dangerous to life balance. If you are obsessive about money, you start to ignore other important parts of your life.

You may side hustle to the exclusion of your family, or your health. An obsessive pursuit of cost-cutting may lead you to eliminate expenses that were adding overall value to your life.

Achieving financial independence won’t do you any good if upon arrival you have no friends, no meaningful life activities, and are unhealthy.

Obsession, by its very nature, is a deeply personal thing. It’s difficult to transfer to another person. The best you can do is find others that share your obsession.

Both of these things can be challenging for a relationship. If you want to bring your partner along on your financial journey, it takes time, examples, and reasoning. These are not things that obsession does well.

Many become obsessed with financial independence because they’re unhappy with their life or job. Obsession is another way to fill the hole, but it doesn’t fix your problem. When that obsession fades, the underlying problems are still there.

Obsession distracts from other things, it doesn’t make them go away.

Be intentional, instead of obsessive. I’m fortunate that my early obsession transitioned to a lifelong passion rather than fading entirely. This is the best-case scenario. I’ve certainly had times where one obsession faded to be replaced entirely by another.

I now clearly see how much more productive and fulfilling intentionality is than an obsession. It virtually guarantees that you’ll reach financial independence while also helping you improve life along the way.

The definition of intentionality is “the act of being deliberate or purposeful.” Our current culture unfortunately often translates this as being boring. We celebrate the dramatic flourish or act rather than deliberate choice. In doing so, we ignore the path that will most likely lead to success.

If obsession is a bonfire that rages until you burn out, intentionality is the torch that leads you where you need to go.

Being Intentional Is About the Long Term

If obsession fades after time, intention only grows stronger. Each intentional choice strengthens the base you are building from and invites new intentional choices. You experience small successes that lead to the next big success.

When you’re being intentional you expect each small action to show up over time. This is the opposite of obsession, which expects (and requires) dramatic shifts to sustain interest.

Intentionality Allows for Adjustment – Increasing the Chance for Success

While obsession can drive you to a goal with single-minded pursuit, being intentional lets you adjust along the way. Think of the difference between a novice skier bombing down a hill, desperately hoping to avoid a wipeout and an experienced skier in control of every turn and bump.

The novice *might* get there faster, but the vast majority of time won’t get there at all. Instead, they’ll be wrecked somewhere along the way – having hit an unexpected bump (or other person) with no ability to adjust. Loss of control suddenly wipes them out or leads them dramatically off course.

Intention allows you to adjust your actions to the conditions around you. You can capitalize on opportunities and avoid dangers. You might even find a better path than you initially planned!

Obsession blocks out everything but the singular object of your focus. The opposite is true when acting with intention. Intentionality requires you to consider multiple inputs to make the best choice.

You’re much more likely to notice, and adjust to, a loved one who is frustrated with your actions. Or, to reflect and give yourself some critical rest before you collapse.

When you are deliberate about your choices with money, this may increase your ability (and likelihood) of being deliberate in other areas. It certainly did in my case.

If you’re intentional not obsessive with your finances, you’re dramatically more likely to reach financial independence.

It’s not at all uncommon to start out obsessive, push hard, and find yourself less happy than you were before you began. It’s not worth it to make yourself miserable for years in exchange for an imaginary future freedom.

Instead, act with intention. Build your path to financial independence by being intentional about changes you make and actions you take. Make choices that improve your chances of success without making you miserable in the moment.

These choices will vary for everyone, because everyone has different priorities. Here are a few intentional choices that I’ve found improved my life and ensured our future financial independence:

If you are in a relationship, be intentional about including your partner in everything from goal-setting to planning. One of our biggest mistakes was not talking about money together for a long time.

If your partner doesn’t feel as strongly as you do, first reflect to see if you are in the midst of obsession. Don’t assume they’ll share it.

Adjustment requires measurement. Be intentional about setting goals and tracking your financial progress.

I believe in tracking net worth and savings rate as the primary FI metrics. We set 3-5 short term (annual goals) that will increase the long-term metrics.

Set a review schedule that works for you to monitor and adjust – but isn’t so frequent that it feeds obsession. No one needs to check their net worth daily!

We set goals and a rough budget annually. We calculate our net worth quarterly. We discuss our progress and current happiness monthly. This works for us.

Be intentional about setting up a system that works for you.

This requires more intention than you might think. Many get obsessed initially with the idea of financial freedom down the road. We seek to earn more, and eliminate anything that costs money from our lives. This is a prescription for disaster.

Instead, note what makes you happy in life. Keep those things and find ways to do them more cheaply. For us – this is travel.

Note what you don’t need as well, then eliminate that. We thought for a long time that our house was important to us. After intentional review we decided to downsize.

That process helped us identify what we really needed to be happy, and to find the right smaller home. We kept all the things that are important to us – but cut our monthly housing costs in half!

Automatic and intentional are not the same thing, but they’re closely related. There are incredible benefits to automatizing as many aspects of your finances as possible.

Set your savings and investments up for automatic withdrawals. Reduce the amount of money you have the ability to spend. This can help you shrink lifestyle inflation, avoid decision-fatigue, and resist market timing.

Balance in All Things

Circling back to the start – be intentional about adding balance into your pursuit of financial independence.

Check-in on those important relationships in your life. Watch your health as carefully as you do your money. Adjust your goals to fit your priorities and make sure you can finish the marathon.

If you’re in the midst of obsession, it can feel great. You’ve got focus and drive and your goal is so clear. You must obtain the object of your obsession. But, at what cost?

Obsession isn’t healthy. It almost never leads to success. If you do reach the goal, you’ll find wreckage around you.

Instead, step back and build a purposeful plan. Make intentional choices. Reflect and adjust along the way. Prioritize those people that are important in your life. Balance your life so you aren’t miserable now while pursuing a better future.

I’ve shifted from obsession with financial independence to a long-term intentional plan. My present life has improved as a result. Have you had a similar experience?