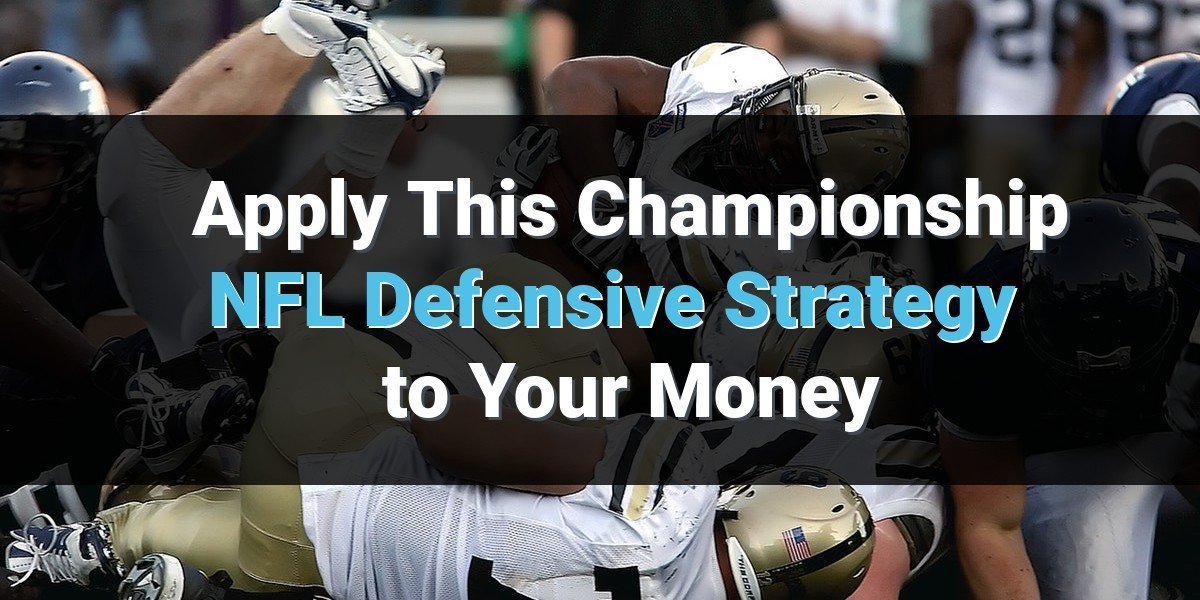 I hate the New England Patriots.

Great – I probably lost half my audience with the football title, and now lost another quarter with that opening line. Stick with me though – this does apply to money, I promise!

Applying this NFL defensive strategy, which helped the Patriots win six championships, to your finances will help you accelerate your path to financial independence while still enjoying the present. It’s worked for us.

The New England Patriots are a team in the National Football League. And I hate them. In fact, I’ve had this post idea for months, but needed to wait some time after the Patriots won their 6th Super Bowl before I could stand to write and publish it. I’m finally rolling it out in honor of the coming NFL draft.

Even I have to admit the Patriots are the most successful team in football for the last few decades. Sustained success.

The Patriots are to football what Warren Buffett is to investing. If Warren Buffett got caught committing tax fraud and insider trading, then whined constantly about how the IRS and SEC picked on him. (Ha, I couldn’t resist…)

If you pay attention to just about any media, you’ve probably heard of Tom Brady. He’s great, but he’s not actually the secret to the Patriot’s success. Instead, the Patriots have a coach named Bill Bellichek, and he’s a defensive genius. (So…hard…to say…good things…about… Patriots….)

While other NFL teams have had better defenses that have come and gone, Bellichek’s teams have done one thing consistently well. And they win consistently because of it.

The NFL is a league built around offensive superstars and fantasy football. People know the big names and those that consistently put up stats. You can count on Antonio Brown, Todd Gurley, Patrick Mahomes, and others. These players will always have big numbers, will always score, will show up big in every game.

Except against the Patriots.

You see, the Pats build their entire defensive plan each game on one simple concept: Limit the damage of the other team’s best weapon. This is dead simple and sounds obvious. But it isn’t. Where other teams just accept that a superstar will do damage, and try and get their edge elsewhere, the Pats focus entirely on attacking the opponent’s strength.

If the opponent is built around the run – they’ll take that away and dare you to beat them with the pass.

Maybe your quarterback throws a great deep ball – he won’t against the Patriots. They’ll sell out for the pass rush to keep that QB moving.

If your star wide receiver average 10 catches and over 100 yards, they’ll make sure he doesn’t hurt them. They’ll make you find other ways. And most teams can’t.

The Patriots take the opponent’s biggest strength and make sure it only hurts so much. Sure, a good offense, or superstar, will still perform against the Patriots – but not like they will against any other team. You can’t shut down Antonio Brown, but you can limit his impact.

In short, the Patriots take whatever you’re best at, minimize it, and make you find another way.

How Does This Apply To Personal Finance?

You can quickly build a path to financial independence by eliminating spending on virtually everything. Live in a box, eat rice and beans, trudge to and from work. Do that for a number of years, and you’ll get there.

I don’t think that’s healthy. And, I don’t think many people can actually maintain that level of commitment. Even those who have, often regret it afterward. We should build our financial path while still enjoying the moment in which we live.

We each have things we like to do that cost us money. They may even be our very favorite activities. They add joy to our life, and because of that we spend far more than we should on them.

They’re our crowd pleasing superstars – and they cost us.

What if we were to apply the Patriots defensive strategy to this part of our financial life?

Is there a way you can limit that superstar? It will still have an impact. But can you stop it from damaging your chances of winning?

To do this, NFL coaches spend hours watching film. Bellichek is great (fighting..off..urge to delete those words…) at figuring out which player is really key to a team’s success.

For you – it’s easier. Hopefully, you’ve been tracking your spending and already have a good idea of where your money goes. What spending is most hurting your long term chances of reaching financial independence? Start your gameplan there.

Another way is to think about what you spend on mindlessly. What do you really enjoy doing, and therefore apply no spending discipline to? That could be the superstar – you know you won’t give it up, but you can create a plan to reduce the damage.

Now, just like the Patriot’s defense, focus on reducing the impact of that one thing. By applying your planning to one significant thing, rather than just “saving money” you’ll make more progress. Once you’ve contained one superstar, you can move to the next.

We first tried this strategy on our book spending. It wasn’t the largest spending category for us, but it was a significant part of our discretionary spending. And we’d never give up books. But, perhaps we could create a plan to limit the mindless spending.

Both TFI and I have a lifelong love of reading. And, we are both educators. Books are important to us.

Because of that, we always had a mutually agreed rule – no guilt spending on books. We poured money into our classrooms and our personal library. In our first house together, one of the first things we did was turn a spare bedroom into a bookshelf covered library. And when we moved to a bigger house, dozens of boxes of books came with us and we did it again.

We didn’t track our spending then, but I know we easily averaged more than $100 a month on books. We each read a book a week. We regularly give books as gifts. Add in classroom book buying (some reimbursed, some not) and we were probably approaching $2000/year on book purchases.

Book spending was a superstar in our life. We applied the Patriot’s strategy by looking for ways we could still keep reading, while reducing it’s impact on our finances.

We sold all but our favorite physical books (some you’d just have to pry from our cold dead hands) to a used bookseller. We took store credit since we got double the amount by doing so. We use that credit to buy gifts or books we absolutely can’t wait for.

Now, we use our Kindles and the local public library. We put holds on the books we want, and read them digitally. It’s convenient, and we never run out of things to read despite both of us reading multiple books each month. It would still work with physical books, but the automatic download is hard to pass up.

Unrelated Note: As lifelong book lovers, we both resisted moving to electronic reading. It took us both a while to give up physical books for Kindles, but the convenience and ease of reading has actually been a life improvement and has not affected our reading joy at all. We’re both using Kindles that are more than 5 years old and have no end-of-life in sight.

If we (reasonably) assume spending of $100/month on books that has been eliminated – that’s an additional $1200 a year applied to our investments. Meaningful!

And we still read constantly. Our superstar still performs, but isn’t doing damage to our long term financial health.

This one is still a work in progress for us. Others have mastered it.

Travel costs were a major part of our lifestyle creep. Even prior to getting married, we planned to travel often. As we poured ourselves more and more into our careers, we adopted a work hard/play hard mentality. Our school work weeks were (are?) typically 60-80 hours.

To cope with that, we travel at least once a month on a weekend, and then take longer vacations any time we have a longer break. I don’t regret it.

But, what used to be a simple trip then became a regular trip to a higher end hotel. Our longer vacations got more tropical, and more luxury. We stopped exploring and started resorting. It was ugly – and expensive.

We’re currently working on applying the Patriots strategy to our travel cost.

Instead of flying somewhere at every break we’ve tried a train trip, shorter local stays, and just finished a long road trip for spring break. We’ve also decided it’s time to focus on travel hacking, which seems to be the main way PF enthusiasts travel while controlling costs.

Travel will always be an important part of our life. Now, we’ll just make sure it doesn’t hurt our chances of achieving financial independence.

The reality is that the big 3 spending categories (housing (33%) transportation (16%), food (13%)) are the superstars for almost everyone. They account for the most spending and are hardest to reduce significantly.

Housing is our real superstar. We’ve been unable to limit it’s damage. In fact, it’s still running rampant through our budget.

We love our house. We love where we live. It’s not cheap, and it doesn’t help that we have some personal criteria regarding view and walkability.

Income growth has allowed us to absorb the damage and still make progress. Housing is about 20% of our income.

But in order to accelerate our path to FI, or start seriously thinking about retiring early, we need to apply the Patriot’s strategy to our housing. That means keeping the criteria that create a great quality of life for us while making adjustments in other areas.

We’re still developing our game plan. Our early work suggests that we’ll be able to meet our most important criteria while cutting housing costs by more than 50%.

Once we get it right, and execute it, we’ll significantly accelerate our path to FI. I can’t wait to post more about this.

UPDATE: We’ve pulled the trigger! Read more about our downsizing process starting with Pros and Cons of Downsizing Your Home.

I know this post was too football centric for some. I assure you I resisted really geeking out – I didn’t even include stats showing what happens when star players face the Patriots defense! But, I had fun writing it.

Ignoring the football aspect – there is value in recognizing what activities are important to you but finding ways to reduce their financial impact.

Don’t squeeze all the joy out of life while pursuing financial independence. Instead, find your spending superstars and limit their financial damage.

What are your spending superstars? What examples do you have for reducing costs but keeping the joy?