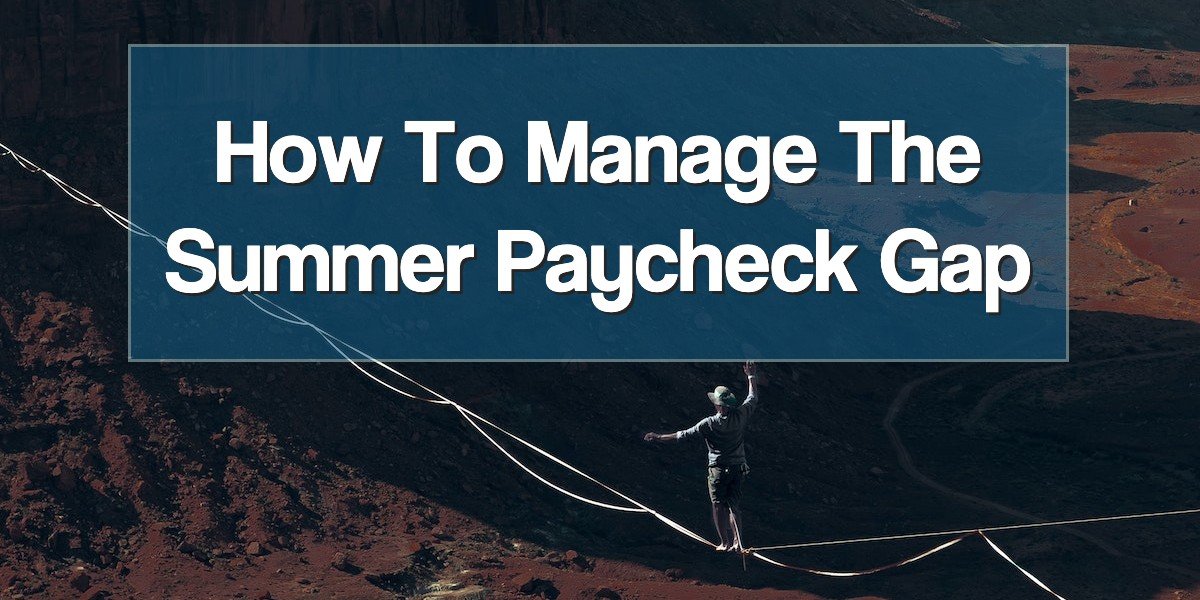 Those early falls as a teacher were tough. We barely hung on waiting for the first paycheck of each year. We cleaned out our pantry of anything edible and lived on credit cards. July and August flew by, but September seemed like the longest month ever.

By the time we got paid we’d fallen behind financially and would dig out before the Christmas spending season started. Lots of our early debt was from this cycle. Sure, some of the struggle was low pay in the first years of teaching. The furlough days in year 2 didn’t help. We could have done better, though.

I’ve been honest that we were fairly clueless and made lots of mistakes. I wish we’d handled those summers better. I think you can. Here’s how to manage the summer paycheck gap.

I’ve written about the myth that teachers get paid for summers off and how we typically only get paid for the 10ish months of the school year. The mechanics of that work differently depending on how your district approaches it.

Some teachers do get consistent paychecks throughout the school year. If this is you – that’s great. You probably don’t need to worry about the summer paycheck problem and can instead just focus on making more money.

Many teachers though have a summer pay gap. They may be paid for ten months and set aside some throughout the year to bridge the summer. For us, our paychecks were divided into twelve months but we’d get three paychecks at the end of the school year in June.

In these cases, you’re looking at a large chunk of money sitting in your bank account in late June that has to last until your first paycheck of the school year. If you’re paid monthly, that could come as late as the last week in September.

It’s a challenge if you don’t approach it intentionally.

How To Plan For a Long Summer Without A Paycheck

You’re staring at a fat bank account (well, at least for a new teacher!) and a free summer. It can tempt you to spend freely or assume the money will easily last.

So, how can you get through the summer?

The first step is to check with your district about payroll options. Some districts offer multiple options for teacher payroll.

If you’re great with money and have a clear financial plan, then getting larger paychecks sooner might work best for you. If you’re struggling to bridge the summer gap, taking your paychecks spread over 12 months may work best.

Know your options, and select the one that works best for you.

If you’re going to have a summer pay gap, continue reading.

The Vegas Approach (Don’t Do This!)

Since we were both teachers, we got six paychecks in June. It was the equivalent of 25% of our annual income sitting there to spend. I used to joke that we should head to Vegas, find a roulette table and put half of it on black.

If we won, we’d have a great summer! If we lost…well, we’d eat a lot of rice.

Note: We never actually did it. It’s a joke and a horrible idea.

Earn Money In the Summer

A “simple” way to bridge a gap without your regular paycheck is to get another source of income. Lots of teachers take second jobs in the summer or focus on side hustles.

Consistent with our lifestyle inflation approach, this is how we eventually stopped worrying about the summer gap. Instead of getting better at managing our money, we just earned more by taking on extra duty.

It works, and in the early years it might even be necessary depending on how well your district pays. It’s not the best solution, and it would be better if extra money earned over the summer actually helped you build wealth.

Or, maybe you even *gasp* want a break from work to recover for the coming school year. The next two ways help you actually manage your money to bridge the summer pay gap.

Managing your money requires knowledge, but it also requires managing your own mind. For us, one of the biggest challenges was seeing a large balance and spending freely early in the summer. We’d feel confident we’d make it through this time, and then suddenly in late August we were short.

When you are staring at that big balance in June, divide it intentionally into monthly allotments. Open up multiple accounts. Most banks will let you do this internally, but if you need more separation it’s easy to open an online savings account at multiple banks today. We no longer do this, but we do have accounts at multiple banks – monthly cash flow (local credit union), emergency fund (Discover) and property tax sinking fund (Marcus.)

Let’s say you make $38,000 a year. Divided over 12 months, that will leave you about $2600 to spend after taxes. Your mindset and habits are built around this number.

Suddenly, in June you have $7800 to spend. This could be because you’re paid all at once or because you’ve carefully put aside some each month to use over the summer. The reason doesn’t matter – you have a large balance to stretch over time.

Let’s say you have to make it through three months until your next paycheck in September. Divide it into three accounts. (If you only have two months, divide it into two.)

Instead of staring at an extra-large account balance of $7400, you’re now looking at your usual monthly pay.

This helps you in a few ways. It protects you from the mental impression that you suddenly have more money than usual. It also gives you midpoint checks that allow you to adjust. If you suddenly end up short on your July allotment, you have more time left to adjust.

In addition to earning some money over the summer, doing this kept us from being surprised in September.

During our debt paydown phase, we were actually pretty good at budgeting. We’d create a strict monthly budget and follow it throughout the school year. We paid down our consumer debt rapidly.

Unfortunately, it didn’t solve our summer pay gap problem until we realized that summer required a different budget. You have more free time, fewer work obligations, and much more potential to spring a financial leak on travel or entertainment.

It’s not wise to pretend that the summer months are the same as your work routine. Do yourself a favor and create a summer specific budget.

If budgeting works for you, or you’re willing to try it to solve this problem, I’d recommend sitting down in May to create a budget for June, July, and August. Include any summer savings you have, and decide what you’re willing to commit to summer travel or entertainment.

You’ll drastically increase your chances of making it through the summer without sliding into new debt.

Choose the approach that works best for you. Focus first on just getting through the summer pay gap with a little money left over in the fall. As you become clearer with your financial goals, you can mix and match approaches to improve your summers and meet your financial goals.

Over time, we increased our teacher salaries and it became less about surviving and more about improving. When we started making financial progress, we used all three:

As a result, summer stopped setting us back and became a time of financial progress.

How have you managed the summer pay gap as a teacher?