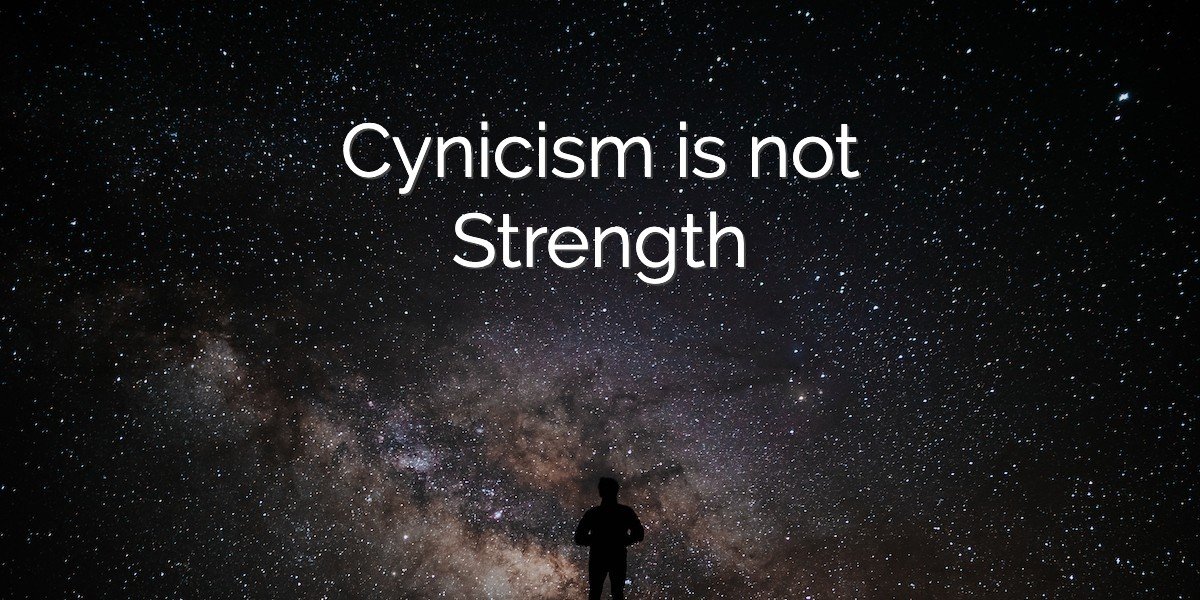 No one is born a cynic. Children are, by nature, optimistic. Filled with trust, hope, and promise. How does that become the cold armor of cynicism?

Life is good. The world is bright, the summers endless. Everything is warmth and adventure.

Then your dad leaves. Your mom carries the weight of the world to make things work. Money is tight, food is scarce. Domestic violence and alcoholism enter your home. These shadows don’t belong in a bright world.

You notice something in the kids around you. The bright ones, the kind ones, the strange ones, end up getting worn down and dragged into “normal.” Middle school, in particular, is a brutal crucible. It’s easier to be part of the social machine, rather than be ground down.

You enter high school already trying on cynicism. You hope for less, you expect less. It’s easier that way.

In high school, teachers pound into you the media talking point of the day, “Your generation is the first in American history that is expected to experience a decline in the standard of living.”

Achievement and effort matter. So too do the car you drive, where you live, and the people your parents know. You can only bring 2 of the 5 to the table.

You get into the college of your dreams but the numbers just don’t work. You can’t ask your mom to take out loans she can’t afford. Other kids go on to the schools of their dreams, because their dreams are average or their parents can pay.

The news is full of people being horrible to each other. Then using those horrors to justify new ones. It’s an obvious and yet somehow inescapable cycle. War, terrorism, white supremacy, poverty. The world will end in the year 2000.

You watch so many pieces of society take advantage of the desperation of a single mom.

Your generation adopts the ethos: It’s cool to not care. After all, Reality Bites and you cannot trust institutions to take care of you.

You expect nothing from others and hope for nothing from the world. You’re confident that’s exactly what you’ll get.

It’s not despair. Never despair. Instead, simple resignation that the world is hard. You have to be harder.

A cynic has been forged.

I came by my cynicism honestly. It’s been one of the defining traits for my adult life. (The others, I hope, are a bit more positive.)

Our society will tell you that cynicism is wise. Optimism is naivete in a cold and cruel world. Hope is inevitable disappointment. I certainly believed these things to be true.

Only recently have I realized that cynicism is not strength. It’s a type of cowardice designed to protect one from the pain that comes with hope. Instead of helping you, it weakens you, limits your potential, and leaves you vulnerable in unforeseen ways.

As a (slowly) recovering cynic, here are some of the harms I see in cynicism:

How Cynicism Hurts You

“If you expect nothing from people, they won’t disappoint you.” This was a favorite quote of mine. I’d often pull it out when a more optimistic friend had been hurt or harmed by someone in their life.

The reality is, true relationship requires a level of trust. Your friends and loved ones deserve you to have high expectations for them. Sometimes they’ll let you down, but maybe they’ll deliver in surprising ways.

Always expecting the worst from those in your life keeps you closed off to friendships and strong bonds.

Cynicism Is Fear Based

Looking at cynicism as strength is so clearly backwards. It’s based entirely in fear. The fear of being let down, of having your hopes dashed, of collapsing backward instead of falling forward.

Fear is toxic – it does mental and physical harm to you. While fear will protect you in truly dangerous circumstances, it harms you when it guides you constantly. It inhibits your coping mechanics and you ability to rise out of bad circumstances.

Making choices based on fear is never the best path.

Cynicism Leaves You Vulnerable to Manipulation

I don’t feel the need to defend this one. Instead, I’ll point simply to some of the major forces of our time and how totally they rely on cynicism.

Watch a local newscast and learn “The 20 ways your couch cushion is trying to kill you.” Your physical environment is dangerous and designed to cause harm!

What do you need to buy for your home to protect you from the apparently endless number of people waiting to break in and steal your precious things? The commercial will tell you – other people are evil and dangerous!

Most of all – look at the politics of recent years. How can people be so easily manipulated into fearing each other, hating each other, and voting against their own ethical codes? The world is evil and dangerous!

This is a financial site, so I should clearly point out a few ways cynicism will hold you back financially. Progress requires risk. Cynicism makes you risk averse.

If you start from the default position that things are going to go wrong, you are less likely to take risks that will improve your finances.

A new job? Why bother? They’ve already got someone in mind.

Reach for that raise? The boss will say no anyway, don’t waste the energy.

Start a business? I know the stats on how many fail.

Better to just stay in the job you have, making less than you’re worth. That’s just what the world is.

Investing in the Market

Investing in the market requires a level of optimism. (You should, of course, do your research so you understand investments. Blind optimism in investing isn’t wise either!)

You have to believe things will improve in the future – the market generally rises.

I have no data on this, but I’m confident that a high percentage of people who keep all their money in low interest savings accounts or under their mattress are cynics.

If you do invest, a cynic is more likely to believe that a market drop is going to continue and bake in losses by selling investments at the bottom.

You Drag Others Down With You

When you are a cynic, you can’t help but spread that to those around you. If they’re important in your life, or interact frequently with you for other reasons, you will start to see them shine a bit less.

Instead, you’re just helping perpetuate the cruel world. We need hope, light, and a little optimism.

How I Finally Realized This

First, let me be clear, I never brought cynicism into my school or classroom. I work in education to try to make the world a better place. I’ve always exempted kids from my sometimes dark impressions of people.

Kids need and deserve those around them to have high expectations of them and their future. I’ve seen the power of belief and how it helps lift students up.

In some ways, it was this faking it for kids that helped me realize what a disservice I’ve been doing to myself and those in my life with my cynicism.

Giving others hope, believing they will build a better life, is far more helpful than telling them otherwise. No matter what you believe to be true.

I’ve also realized how little sense it makes for me to be cynical. Yes, I had some hard moments early on. Most of us do. But I’ve also lived and worked in a system that has pushed me forward in just about every situation. I’ve been successful personally and financially. I have a great marriage, am secure financially, and healthy.

All it requires is me paying a little attention to see others who have struggled against far greater barriers and still managed to maintain hope and optimism.

How self-centered and weak it is for me to be a cynic.

Note: This is a reflection on my personal cynicism and not a manifesto telling others to ignore their past or be more optimistic. There are those who have faced trauma, persistent racism, bigotry, and discrimination. If they choose to armor themselves with cynicism, I’m certainly not going to pass judgement on that. Neither should you.

I also watched the actions of those in power acting as if the world were inevitably doomed. Those who believe the goal is to get theirs at the expense of others. Those who can’t see the wisdom of lifting up others and building a better world.

And I realized my cynicism would lead me down the same road. Old, scared, making decisions that benefited me at the expense of others. What a horrible fate.

Despite this, I still continue to hold onto my cynical view of the world. And, the world has gotten darker for me, and those in my life, as a result.

It’s a bit like Pascal’s wager, applied instead to personal outlook.

In either case though, proceeding with a little hope makes it a bit better or more bearable, a little less toxic to self and those around you.

It’s taken me far too long to realize this. I need to correct it.

The Opposite of Cynicism is Not Naivete

Cynicism is not strength or wisdom. It’s self-protection and fear.

Instead, it’s optimism that requires strength and courage. The willingness to expect more of the world or others, and to push through despite the outcomes.

Just as courage is not the absence of fear, but persistence in spite of it – optimism is not cluelessness about the realities of the world but a willingness to hope despite them.

I’ve never done the “word of the year” thing before. The cynic in me scoffed!

As an intentional act to aid my shift away from cynicism I’m doing it for 2020.

In the coming year I’m embracing (cautious) optimism. I have to leave the parentheses because I’m still a recovering cynic!

I will work to extend hope and trust to others. I’ll expect more of the world, and hope that the current politics of cruelty, greed, and self-aggrandizement are rejected.

I’m not going forward with the assumption that people are inevitably good, that only positive things will happen, or that the world will somehow become a just place in a single year. There is plenty of evidence that those things aren’t true. Optimism doesn’t require me to ignore that.

Instead, I am choosing to act as if those things are possible. To let people enjoy hope. To encourage others to try things that may fail, but won’t harm them irrevocably if they do. To comfort those who are hurt without pointing out they were silly to hope otherwise.

It took years to make me a cynic. I won’t be able to release it all in a year. But, I’m going to start.

Cynicism is not strength.