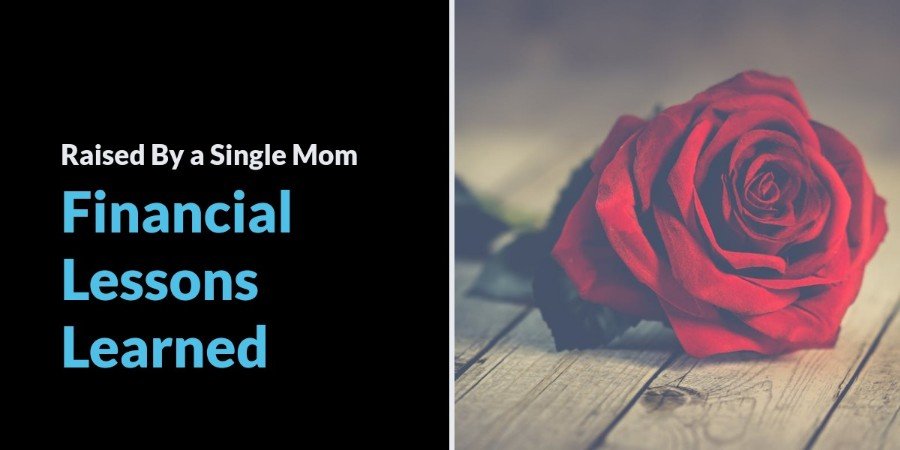 Sunday is Mother’s Day. It’s the first Mother’s Day since I started Educator FI, and you better believe I’m going to use it to talk about being raised by a single mom. Contrary to the dominant narrative, it wasn’t a disadvantage and didn’t doom me to poverty. Instead, I’ll share financial lessons I learned from being raised by an incredible single mom.

When I was growing up, being raised by a single mom was seen as a significant deficit. The two parent nuclear family (heterosexual, of course) was the ideal state. Society was reportedly falling apart because so many women were raising children on their own.

Somehow the single mom was doing a disservice to her children, and they were doomed to horrible outcomes. Single moms were either struggling to make ends meet, or working the welfare system. “Welfare queens” was a popular political rant.

The sexism and racism of the narratives was thick and heavy. Being a single mother meant you had failed somehow. The message was clear – single mom wasn’t something you wanted to be. And if you were being raised by a single mom, you were deprived.

I saw it all, and even as a kid I knew it was total BS. My father was the one who failed and left. My mom stuck around.

I’ve spent my life, and professional career, committed to changing that narrative. I push back constantly against the perception and bias towards single parents I see in education. And I’ll write about it here every Mother’s Day.

Being raised by a single mom made me who I am today, and I’m proud of it.

My Mom Is Incredible – Not Perfect

My mom is incredible. That doesn’t mean she’s perfect. It’s part of our culture that a woman needs to be some amazing badass to be a hero. Meanwhile, mediocre men are regularly lionized just for showing up. Forget that.

My mom made mistakes. Lots of them. Some of my greatest lessons come from those mistakes. She didn’t teach me everything I needed to know. She didn’t have all the answers. I get my introversion and social anxiety from her and how I watched her navigate the world.

But, she is a brilliant woman. Who always shows up. Who never quits trying. And she makes progress every single day. She’s built a good life for herself. Her children are successful and serving the world in healthcare or education. After years of struggle, she’s financially healthy, happy in her career, and preparing to retire soon.

I have no doubt I grew up a better person because she raised us than I would have had my parents stayed together. It wasn’t easy. But it was great.

She impacted so much of my personality, how I show up in the world, and the traits that have made me successful. But today, I’ll focus on the financial lessons I learned being raised by a bad-ass single mother.

Oh, and this is my perspective and experience. I’m not trying to generalize – that’s the point.

Financial Lessons I Learned While Being Raised by a Single Mom

I’m starting with the biggest lesson. It’s why I eventually dedicated myself to public education.

Until my dad left, my mom had chosen to stay at home with the kids. Suddenly, she was left with three children, 8 and under, and no income.

Over the next 6 years she worked as a certified nurses assistant in care homes while going to nursing school full time. (She hired a babysitter for us until I turned 10, then I took on the duties.)

Shifting from no income, to low income, to a professional income when she became an RN was a clear lesson in the power of education. It’s no wonder that two of us now work in public education, and the third in healthcare.

Education was our family’s path out of poverty.

Not that my mom never complained or had low moments. We all have those. But she never wallowed in it. Did you see where I just mentioned she spent more than four years working full time (graveyard) and going to school full-time (days) while raising three children (swing)?

I’ve worked 80-100 hour weeks and they were nothing compared to what she did for four full years.

In my life, I’ve always avoided the constant complainers. Instead, I try to be the one who pushes through the bad situation to make things better. It has served me well.

Yep, we had years where we were on food assistance. The social stigma was awful. My mom hated it. But it’s how we ate sometimes. As soon as she got a job paying enough, she dropped it as fast as she could.

It helped us survive, while my mom built the skills she needed, and for more than 30 years since she’s been paying taxes and providing service to society. Not a single one of her children has ever been on public assistance. It worked as designed.

So, I never begrudge paying taxes or bitch about people “on welfare.”

If you do, but support millionaires who pay little-to-no tax while making their money using public infrastructure – then your politics make no sense. Talk about welfare.

I will always support those things that elevate others to prosperity. It’s both the right thing and the smart thing economically.

My dad was supposedly the “frugal” one. Before he left, we lived on relatively little. He hated spending money. After he was gone, my mom showed me that value matters more than price.

Here is a clear example – my dad insisted on buying me the cheapest shoes possible. We got the $8-$10 specials at the local discount store. I was an active kid, constantly exploring outdoors, and always playing some sport.

My shoes would have holes within a week – a month at best. Then, I’d spend several months walking around with ripped out shoes. Finally, we’d buy another pair of discount shoes – repeat.

After my dad was gone, my mom instead bought good quality leather shoes of a known brand (on sale) that would last me the entire year. In the end, it was a savings and better for my health.

Now, I pay for quality (not just a brand name) even when it costs more. In the end, value matters more than just the initial price.

You know how much we read and write about bank accounts in the personal finance space?

Yeah – not everyone has one. They certainly didn’t thirty years ago when it wasn’t quite as accessible as it is now. For years, my mom didn’t. There wasn’t a point if you never had any savings and every month was a stretch to make it to the end.

Except, without an account there were constant fees for everything. She’d need to pay to cash her checks, pay for money orders to pay certain bills, etc. One of the best days was when she felt able to open a bank account.

Again, this was thirty-five years ago. It was a different time. The good news is more than 90% of Americans have primary bank accounts now. The bad news is I still fear many are being taken advantage of with fees that chip away at their limited resources. And, still almost 10% don’t have access to a critical financial resource.

The first thing I did when I got a job was open my own bank account. And I was vigilant about the fees involved. Now I use savings accounts strategically to meet my financial goals.

She had access to credit. She wanted her kids to have everything their friends did. And sadly, we were in our middle-school years and subject to the usual horrible peer pressures.

Enter lifestyle inflation and credit cards. Combine that with a car loan and an ex-husband that didn’t pay his taxes and dumped a portion of the debt on her, and she went from nothing, to success, to struggling with debt.

Despite her best efforts, the interest rates on the credit cards were a constant anchor. She couldn’t catch-up.

It took a bankruptcy to clear, but her lesson was learned. She’s had perfect credit since then. And I’ve paid every debt I’ve ever had, and always will.

Use credit cards as a tool for spending – not as a loan. Avoid them unless you can pay the balance every month.

Have an Emergency Fund

When you are truly stretching to make ends meet any savings is a dream – let alone an emergency fund. When something unexpected happens – it is devastating.

We had too many moments like this during my childhood for me to list. Just as we were making progress, an unexpected bill (e.g. my brother breaking his arm) would pop up. We’d go from almost okay to desperation again.

And when you’re desperate you don’t make optimal financial choices. At times, it was a downward spiral that then took longer to climb out of.

If you have the means – create a small emergency fund immediately.

I’ve had a desperate fear of not having an emergency covered since childhood and always have a plan to deal with unexpected expenses.

There Are Predators Out There

Speaking of emergencies – if you’ve never been truly poor you may not realize how many people are out there ready to prey on you. Pawn shops, check-cashing companies, even banks are all ready to make your desperation worse.

An example – one of the few times I ever saw my mom ask for money was when her car broke down. She was nearing the end of her nursing program, I was in sports, and her job was a 20 minute drive. Then, the car crapped out. The repair bill was $300.

She swallowed her pride and asked her mom for a loan. My mom never took money – she only borrowed. My grandmother who was on a fixed income mailed a check for $300. (Yes, this in itself is a safety net not everyone has.)

It was a 3-day weekend, she had no credit card at the time, and the banks were all closed. There was no public transportation in our area – she needed that car.

She had no choice. As her eldest, I sat with her while she cried in frustration and rage, knowing that we’d have to skip some meals to cover the difference.

I learned not to trust financial companies of any type. Everyone wants to make money off your money. Be diligent in analyzing fees and never assume anyone is operating in your best interest.

Oh – and f&*% payday loans, pawnshops, and check-cashing companies. They are a blight on society. You can talk about bootstraps – when you acknowledge the tentacles grasping and pulling in the other direction.

Don’t Let Others’ Expectations Limit You

My mom was a single mother at a time when everyone told her it was an awful thing to be. Never once did she let that matter. She ignored the assumptions, the whispers, and the expectations of others.

Instead, she did what she had to do. From a single mother with three young kids and no job skills, she became a registered nurse. She rose to nurse management and turned down opportunities for higher-level positions (she hates hospital politics.)

She raised three children who are all self-sufficient and relatively successful. Her four grandchildren will be the same, and will grow up without the toxic stress of financial worries.

She was an incredible single mother. The financial lessons she taught me have driven me to success and will help me reach financial independence soon.

It may have improved some since I was a kid, but there is still too much stigma out there attached to single moms. Check your assumptions and expectations.

My mom wasn’t perfect, but she’s my hero. I wish everyone could have a mom like her.