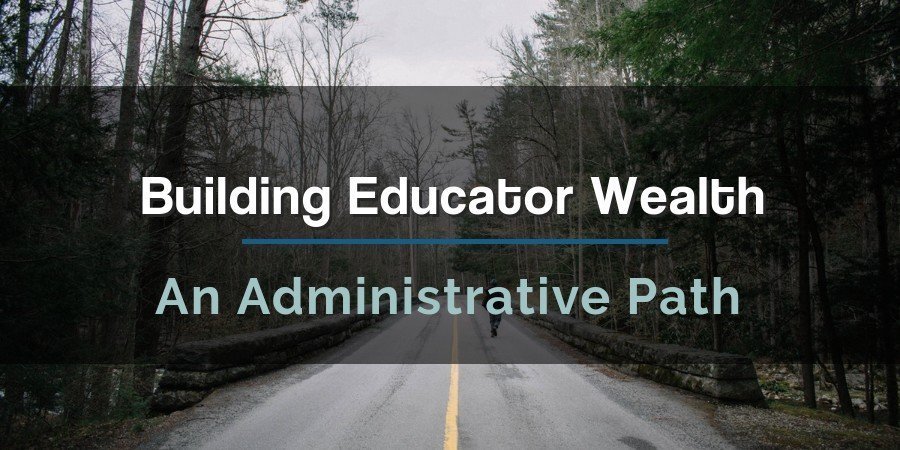 Public educators are doomed to be poor, right? I disagree and have set out to share stories that counter this narrative. This is part 2 of a series of examples of how educators can build wealth with simple financial concepts. Last week, I published a two teacher path to wealth. Today we look at an administrative path to financial independence.

If you crave real world examples, you can also check out the Educator on FIOR interview series. There are lots of different paths!

In last week’s example, two teachers lived a fairly typical life. They started early, but slowly before accelerating in mid-career. Today, we’ll look at an educator who enters administration and follows some key financial principles from the beginning.

To find out, I’m going to keep this one even simpler than last week’s exploration. I won’t assume anything about family situation. You can assume either that our administrator Kim is single or allow her spouse’s income to provide greater flexibility or increased spending. Her progress will be accelerated or slowed accordingly.

This will be a pure exploration of what spending, investing, and net worth growth looks like for Kim as a teacher moving to administration.

Kim lives and works in Houston. She starts out as a brand new teacher, with a Master’s degree at 22.

In her first year, Kim earns $54,369. She starts by investing $300 a month in her 457b. She makes this choice because of the flexibility of 457b vs 403b. She’s fortunate to have Vanguard index options in both plans. This will be important later should she be able to fund both.

She automatically contributes 7.7% of salary to her pension.

In her first year, this leaves $39,000 to spend. A reasonable but not exorbitant amount for a single person just starting out.

From this point forward, Kim rigorously implements the 50/50 provision. Half of all raises go to investments, half to spending. She’ll increase her 457b contributions until max, then move to 403b, and finally to a brokerage account.

In year 8, Kim moves into an assistant principal position at a middle school in Houston. Her salary increases to $82,544. Again, she places half in investments and allows her spending to grow by the other 50%. She is still working on maxing out her annual 457 contributions.

Middle school administration is a lot of work. It’s not quite as enjoyable as a classroom teacher, and she misses the connection she had with other teachers.

The extra income matters to her though, and she knows she’s making a difference.

After 10 years (total), Kim’s financial situation looks like this:

After three successful years as an assistant principal, Kim successfully moves into a full principalship. The work of a school principal is challenging, and even more isolated personally, but she loves the impact she can have. She goes home late each day tired, but knowing she made a difference.

This move is significant in terms of her income. She’s invited to serve at a “hard to fill” school which includes an extra $10,000 a year. Her annual salary goes up over 60%.

This is a big leap forward in Kim’s ability to invest. She caps both her 457b and 403b at $20,000 each (Ed Fi note: Currently, the cap is $19,000 but it’s safe to assume the contribution caps have gone up by then!) and begins contributing to a brokerage account. Going forward, she’ll put the 50% of income increases to the brokerage.

Kim continues this basic plan for another 5 years.

In her 16th year as an educator, she’s asked to move to a central office role. She declines because she feels responsible to her school and staff. She remains a principal for another year, but starts to take on more district-level responsibility. It’s a good fit, and she finally agrees to move on.

In her 17th year, she moves to district office and gets another bump in pay. District office work allows her to connect with more adults, but has less regular interaction with students. She misses it, but does her best to get out into schools as often as possible. This earns her credibility with teachers and the school-level administrators she’s supporting.

Kim is 42, earning $189,385 and contributing $59,320 a year to her investments. Her net worth has grown substantially. Coincidentally, she also passed $1 million in net worth this year!

Kim is thrilled with her progress. She feels financially secure, but also realizes that a million dollars isn’t what it used to be. (Especially after 20 years of inflation…)

Her job is fulfilling, but challenging. She knows she won’t do it until retirement age, but decides to continue and reassess at 45. There are several projects and school supports she wants to complete in the next three years.

Kim continues her 50/50 split, but no longer works to increase her income.

At 45, Kim realizes she is financially independent. She’s uncertain about walking away from the pension. However, she’s been recruited by some local non-profits. She believes in their mission and is eager to try a new challenge.

Kim decides to walk away from the school district. She can access her 457b now if she likes, and then wait to collect her 403b and pension when she is older. For now, she decided that she’ll just let her investments grow, and spend only what she earns in the non-profit world.

This is often called Coast FI – she’s invested enough that she can simply let time finish the work.

Kim continues to work at a non-profit until she’s 50. At 50, she decides to stop working entirely. She can live off accumulated assets and access her pension at age 62.

Here is where Kim stands at age 50:

Kim can choose any of those withdrawal rates and feel comfortable. She’s eligible to start taking her pension at 56 with reduced benefits – only 6 years away! However, she’s smart and plans to wait for full retirement at which point she’ll have an annual benefit over $100k.

I like to ground my salary numbers in real salary schedules.

Finally, I assumed an average annual rate of return on investments of 7%. The rate of return may vary, and inevitably will be higher and lower in some years.

Not bad for a public educator who set a clear financial strategy, and then focused on the work she loved. As a reminder, all she did was:

She was able to leave her high stress career to do non-profit work for 5 years before retiring entirely at age 50 with a net worth of more than $2 million dollars. She’ll also collect a pension benefit of more than $100,000/annually starting at 62.

A public educator can absolutely build a strong financial future! You may be wondering if going from teacher to administrator is worth it? It was for Kim.

Don’t forget to check out the other entries in the series: Building Educator Wealth: A Two Teacher Path, A Teacher’s Path to Fire, and the real stories of Educators on FIOR.