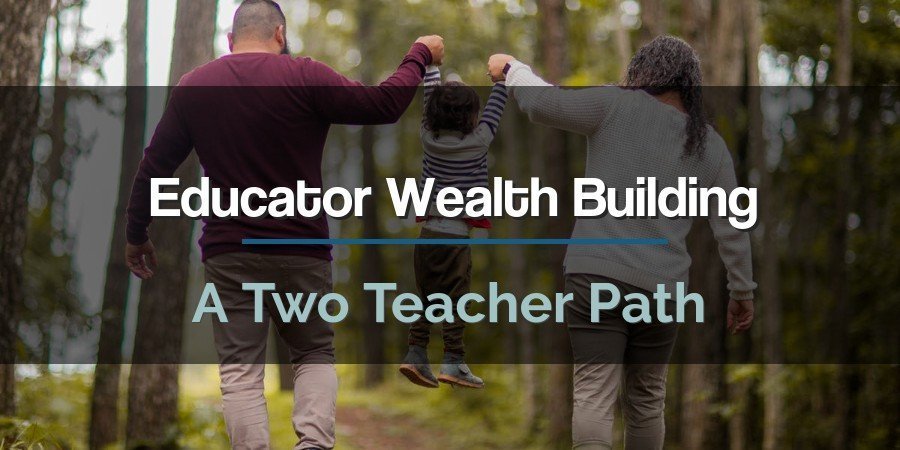 Public educators are doomed to be poor, right? That’s the dominant narrative. I don’t believe it. One of the reasons I started this site was to demonstrate that we can do the work we love AND build financial security.

To that end, in the coming weeks I’m going to create a series of narratives and use publicly available information to check the outcomes. We’ll start today with a two teacher path.

I’m calling it a simulation, but to be fully transparent I’m only running the highest-level numbers. I assume big picture things about spending, but there is room for personal adjustment. Personal finance is personal and there are so many micro aspects of each of our lives that to try to simulate 20+ years of actual living just gives a false sense of certainty.

Oh – and if the simulation doesn’t work for you, check out real stories of educators doing it in the Educator on FIOR series!

Kris and Jordan are 23 when they meet at a teacher job fair. They connect immediately and begin dating. It’s a whirlwind romance and they get married after just a few months. They’re thrilled to both get hired by Kansas City, MO public schools. Jordan gets a job as a middle school teacher and Kris at a neighborhood elementary school.

After switching from a previous career track, Jordan had to go back for a Master’s to become a teacher and enters on the Master’s pay scale. Kris has a bachelor’s degree and a few credits beyond so starts at Bachelor’s +12. (Note: I used this site for district information and to get a copy of the current teacher contract.) After college, they have a combined $30k in student loan debt at 5%.

Kris and Jordan rent a nice apartment near Kris’s school. They have two modest cars that they’ve driven since high school. Jordan drives to work, but most days Kris is able to walk. They love their new jobs, but teaching is tough the first few years. All they can do is focus on getting better at the job and taking a class or two a year. They’re not side-hustling or earning extra income. New teaching is exhausting!

They do talk about money, though. Early on, they make a few decisions. They want to be debt free, including that student loan balance. They sit down and plan to eliminate it in 5 years – it will take $8400 a year. They up their payments to that amount.

They notice that 9% of their pay is going to a pension. That’s so far off and they can’t do anything about it. So, they don’t pay much attention.

Someone also told them it’s important to start investing early. (See my 4.5 Big Financial Mistakes) They check out their 403b and 457b options. They don’t like the fees in the 403b, but find a reasonable index option in the 457b plan. They each contribute $50 a month from payroll to the 457b option and plan to increase it by $50 a month ($100 total) each year.

If things get tight, they’ll stop the increase, but they challenge themselves to never decrease a contribution once they’ve stepped it up.

After accounting for 457b contributions, housing, and the student loan paydown, they have about $27,000 a year remaining to live on. It’s tight, but not uncomfortable.

Over the next few years, they focus on their jobs but keep the initial plan in place. Three things change: Jordan takes a few credits each year and moves to the MA+15 column. Jordan also becomes an assistant track coach in the spring, which pays a modest $2000 a year extra duty income.

They also discover that Kris’s school is in the Low Income School Directory and therefore $5000 of their student loan debt will be forgiven. More great financial news! They adjust plans to divert that “found” $5000 into an emergency fund.

Kris and Jordan discover that they’re going to have a kid! It wasn’t planned, but they’d talked about it. They celebrate and review their plans.

They know their spending will increase, and learn to expect that it will increase steadily as their child, Seven, gets older. They also decide that one of them will cut back to half time until Seven enters pre-school. Jordan makes more and is currently enjoying work and coaching track at the middle school, so Kris requests and is given a half-time assignment.

Recognizing that money will be tight, they stop increasing their contributions. They continue putting money in though, and meet their challenge of not decreasing contributions once started. (457b contributions remain at $4200/year for the next five years.)

The first year is exhausting. Money is tight. They’re glad they made the ½ time choice. In the second year (6th year as teachers) they start to come up for air. They look for opportunities to earn extra money. Jordan picks up a little part time work at a nearby gym when not coaching and in the summer. Kris squeezes in some creative freelancing. The combined extra $3000 in additional income a year helps.

After living in an apartment for several years, a house in the neighborhood goes up for sale. It’s selling for just above the area median price. Things are still tight, but the extra freelance money and Jordan’s opportunity to become head track coach ($3000 a year) give them the courage to take the leap. They buy it on a 15-year loan at 4.5% with no PMI thanks to a program that supports first-time homebuyer teachers. Their housing costs still increase. Things are tight, but they’re happy and excited about the new home.

After five years, Kris returns to work full time. For that first year back, they both cut back on outside work, earning just an extra $500. Kris’s extra school income more than makes up for that. They reassess and decide to get more intentional about saving.

They start by increasing their 457b contributions to a total of $20000 for the year. They also start putting $500 a month into a brokerage account. This is a big jump, but is more than covered by the increase in income.

In the coming years, Kris earns National Board Certification (an extra $3500) and they return to picking up a few thousand a year on the side. Every year, they increase their 457b contributions. Extra income they have remaining is sliced in half – 50% goes to their brokerage account, and 50% goes to spending.

They travel, either road tripping or using credit card miles for flights. They stay in nice, but reasonable hotels. They’ve dropped to one car, which they replace by buying used when needed. They cover that by adjusting other expenses or earning a little more.

They’re both accomplished and respected teachers in their schools. They love their home and Seven has friends in the neighborhood.

Jordan and Kris don’t pay much attention, but their net worth is growing steadily while they enjoy life.

In the coming years, they start feeling financially secure. After 12 years of coaching, Jordan is ready for a break from the parents and drops track entirely. It’s time to let a newer teacher move up from assistant to head coach.

Jordan wants to work a bit more at the gym and partially covers the drop in income that way. Kris is still doing some freelancing when time permits. Jordan takes a few extra classes and finally moves up to the MA+60 column, earning another small bump in pay.

Kris and Jordan’s savings rate, not including pension contributions is above 30%. Life is comfortable, not luxurious. Living in a reasonable house, in a reasonable cost of living area helps.

The 40s and Choices

In their 40s, Jordan and Kris realize they’re on a great financial path and have choices.

At 42, they decide to stop side-hustling entirely. Seven is in high school and they want to attend events and activities. They don’t need to squeeze out a few extra dollars anymore.

At 44, they own the house free and clear. There are still tax, maintenance, and insurance costs but the mortgage is eliminated. This is timely, since Seven goes to college next year!

They plan to give Seven $20,000 a year during college but haven’t set a separate college fund. If they choose to contribute to college costs above that amount, they’ll use brokerage funds.

They’ve stopped increasing the 457b, but still increase their brokerage contribution by half of any raises they get. They’ve managed to meet the challenge of never decreasing contributions, even in years where income drops. Instead, they’ve decreased spending or made a little extra to balance it out.

What does all this look like? What kind of financial situation have Kris and Jordan, two public educators starting out together at 23 built?

After reading the above narrative, what would you guess?

Here are the assumptions I used:

I have no personal knowledge of the Kansas City area. My numbers are based on publicly available information and I want to be transparent about those assumptions and data sources.

Teacher Contract downloaded from NCTQ. I used the actual salary tables for the first three years (assumes they started in 2017 at 23.) I increased the salary tables by 1% annually over the course of their career. That would be a low assumption in my area, but appears reasonable to optimistic in other areas of the country.

Average cost of a child was pulled from this article. I understand that costs and choices vary widely by family.

Taxes were calculated using this tool. Future tax changes are almost impossible to predict. I found that local taxes will go down in 2019, but didn’t make any adjustment because it’s likely federal taxes will increase in the future.

I used the Kansas City Public School retirement system for all pension information and calculations.

There are a number of mortgage and student loan payoff calculators. I tested assumptions on a variety.

Now that all the assumptions are out, here’s how Kris and Jordan fared. Remember, they had a savings rate of 6% or below for their first ten years, and never exceeded a 33% savings rate.

Jordan and Kris hit the million dollar net worth mark (not including primary residence) at 44/45.

At 45, their invested net worth is just over $1.1 million. If they were to walk away, they could access that money without penalty because it’s all in a 457b (no early withdrawal penalty on separation) or brokerage accounts.

They are debt free, including a paid off mortgage.

At the 4% rule, they could withdraw $44,000 annually, inflation adjusted. If they wanted more, or to withdraw less they could easily sub or work part time.

(Note: I’m using the published rule of 80 in the system. I didn’t find a break in service clause but the pension may be delayed until 60.)

They’ve got good options. With a child in college, they may not make the choice to stop working.

If they were to continue working to 50, following the same pattern of the last 5 years, the numbers get even better.

Their pension now becomes available at 52.

Summary of the Two Teacher Path

Teachers are doomed to poverty? In this scenario, two teachers without making wild choices, based on reasonable assumptions, end up millionaires at 45.

If they work to 50, by age 52 they can generate actual passive income (investments + pension payout) of $175,000 a year! Given 20+ years of inflation, that isn’t extreme wealth by any means. But it is a very comfortable retirement.

This scenario doesn’t focus on optimization or extreme frugality. In fact, there are several choices that could have improved their financial situation. They earned extra income, but at a very modest level. And, they still came out in a great place!

Here are the key choices they made:

We can do the work we love and build wealth!

Other entries in the series:

If you aren’t a teacher, but this makes you think about becoming one, read about Grow Your Own Teaching Programs or prepare for an interview with these teacher interview questions.

It’s a great career that can help you reach financial stability!